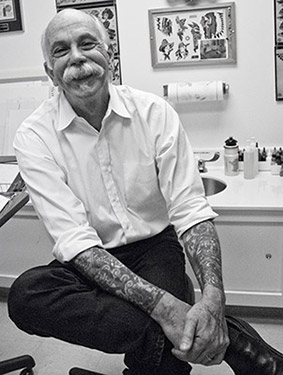 I was born on March 26, 1947 in Western North Carolina and developed an interest in tattoos early on. My dad, my uncles and my brother all had tattoos, and I liked the look of them. I knew from an early age that I would be tattooed. Being dissatisfied with high school, I joined the United States Navy in 1965 and set off for a real education. After 13 weeks of boot camp in San Diego, about $200 in my pocket and 12 hours of liberty, I had my first opportunity to fulfill my childhood dream. I returned from liberty with four tattoos and the beginning of my personal tattoo scrapbook.

During the mid 1960s, Broadway in San Diego was awash with sailors and all the tattoo shops had lines of white hats waiting for their marks of manhood. After boot camp I was stationed at N.A.S. Beeville, Texas and traveled often to Corpus Christi to add to my tattoo collection. 1967 I received orders to the U.S.S. Oriskany CVA 34. The O-Boat was an aircraft carrier operating in the Gulf of Tonkin off Vietnam. This ship took me to the Philippines, Hong Kong, Hawaii and Japan where I continued to add to my ever growing tattoo collection.

In 1969 after completing four years of service, I headed back to civilian life; spending time at various endeavors including, organizing a rock festival, setting up a bicycle shop, studying welding and building bicycles frames. I met and began getting tattooed by D.E. Hardy in 1974.

When Hardy opened the original Tattoo City in San Francisco in 1978, he offered me an opportunity to learn the art of tattooing. I subsequently spent time in Calgary, Alberta, working with Paul Jefferies and Jerry Swallow, in San Francisco with Dean Dennis and later Henry Goldfield.

In 1980, while working with Goldfield, I established the Tattoo Archive and four years later secured a shop front in Berkeley. A year later, I began working full time at the Berkeley location and began to actively document tattoo history. My articles have appeared in many U.S. and overseas publications, including National Tattoo Association, Skin & Ink Magazine, Tattoo Master Magazine, Tattoo Artist Magazine and Tattoo International.

In January of 1993, along with Alan Govenar, D.E.Hardy and Henk Schiffmacher, the Paul Rogers Tattoo Research Center ("PRTRC"), a California nonprofit corporation was formed. This organization works toward establishing a national landmark for the art of tattooing. I currently live in Winston Salem, North Carolina and spend much of my free time researching and writing about tattoo history.