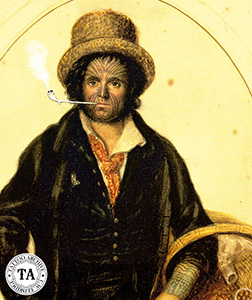 For two centuries the circus has been one of the most popular forms of entertainment in America. Riding on its coattails was the sideshow - often referred to as the black sheep of this American entertainment family.
The first circus performance held April 3, 1793 in Philadelphia, PA, was nothing like the three-ring extravaganza we witness today. The circus street parades took place in 1797, the big top arrived in 1825 and by1880 the full-blown railroad show was touring the United States.

Housed in a wooden structure called the circus, the performance was presented by John Bill Ricketts, and billed as an equestrian event. Ricketts’ troupe toured the United States until the early 1800s when they departed for England. By then, all the major shows were traveling by rail and holding their performances in huge big tops. They supplemented the main show with museums, sideshows, and displayed menageries and parades on a daily basis. Massive ad campaigns were conducted to support their daily movement.

"Circus Day was an entrenched concept in the minds of a populace which viewed it as the premier form of entertainment which visited from the outside world."-- Fred Dahlinger Jr., Circus World Museum.

It was around 1691 that Prince Giolo, a tattooed Polynesian slave, was brought to London to be exhibited as a curiosity. Before this time, midgets, tattooed people, sword swallowers and other attractions of this nature were exhibited singly in pubs, theaters and the like. The 10-1 sideshow that we think of today was born around 1840 when individual acts, which make up the sideshow, were grouped together under one tent.