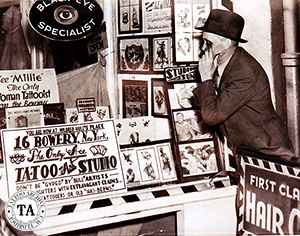 Leeches are back in the headlines these days as medical doctors are discovering that the use of leeches can improve blood flow around new wounds, speed up the healing process and temporarily aid circulation during surgical reattachment of a body part. In the old days bleeding a patient with leeches was part of standard medical care. Now the FDA is creating guidelines pertaining to how leeches should be grown, transported and sold.

Back when day workers were king around shipping docks and construction sites, tattoo parlors and barbershops offered the service of making black eyes look natural. Each morning men looking for day work would gather around the work site. The bosses would stand on cartons to get a good look at all the men and select workers for that day's assignment. If a worker showed up with a black eye, the bosses often passed them over for fear that they would be troublemakers. The barber and tattooist would try to make that shiner look better.

During this era, the tattoo and barbershop often shared a storefront. Since they also shared a customer base, this set-up worked well. On the Bowery in New York City, Mildred Hull and Charlie Wagner were but two examples of this working arrangement.
Many tattooists in New York City (and probably other large cities as well) offered this black eye service. Tattooists would proudly advertise the service on their business cards, and further promote it with large signs in their windows.

The "black eyes made natural" process consisted of placing a hot towel on the injured eye to reduce the swelling, then leeches would be placed around the blackened eye. These leeches would do what comes natural to them and suck the excess blood from around the eye. This did not always fix the problem, so a bit of cosmetic make-up would be applied to conceal the rest of the shiner. These workers could then head off to work without fear of their rowdy past getting in the way of a day's work.