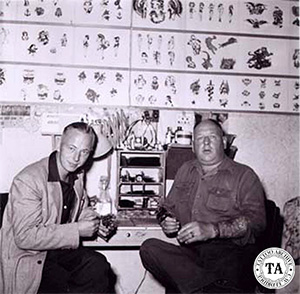 Albert Cornelissen was born March 29, 1913. Information about his early history is unknown but we do know that by the 1950s he was tattooing in Rotterdam, Holland at #36A Veerland. His customers were mostly sailors and when the ships came in to Rotterdam, he would wait at the end of the gangplank and hand out a fist full of business cards. These cards would promote his tattoo shop in Katendrecht, which was sometimes referred to as "Rotterdam's Chinatown." It is only natural that Cornelissen would be drawn to this area of town, since he came from a family of sailors and spent 20 years as a sailor himself.

In a 1957 letter Cornelissen wrote. “I have been a sailor (AB) a great deal of my life and therefore I was always interested in tattooing. I used to tattoo my friends on the ship, with hand tools just to pass time on long trips. And of course it was not so hot at first, but later on I was able to do some little tattoos, and the boys liked it alright. After some year I arrived on the Bowery in New York. There I used to hang around Bill Jones place. It was in the depression then and shipping was bad. I held a dishwashing job on East Broadway and that was close to the Bowery. I got to know other tattooers like Apache Harry, Charlie Wagner, Percy Waters and others. One thing lead to another and when I shipped out again I bought a machine if I remember well from Wm. Jones plus some stencils etc. Later I bought also a machine from Sailor Ralph. The war was on now and I started sailing out of Norfolk, VA. There I became to know Mr. Coleman, and I saw right away that he was the king of them all. He used to work fast and good.”

The 1960s found Albert Cornelissen and his son traveling Europe in this mobile tattoo shop. They followed the US aircraft carrier Saratoga through Spain, France, Gibraltar and Belgium while they tattooed the troops. During this traveling Cornelissen had the chance to visit many tattooists.