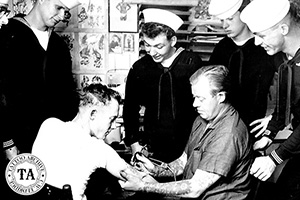 This right-handed tattooist, who died on Saint Patrick's Day 1984, was listed in the book, Art, Sex, Symbol, as "Holland's Premier Artist." In 1974 when that book was published, it was not far off the mark.

Peter de Haan was known in the tattoo business as, "Tattoo Peter." Peter's birth name was Pier and he was born around the turn of the century in the city of Sneek, which is located northeast of Amsterdam. Little is known about Tattoo Peter's early life, but he probably started tattooing by hand as a seaman. Tattoo Peter was inspired by Dutch artist Albert Cornelissen who tattooed in Rotterdam during the 1930s.

The Tattoo Club of America's newsletter dated October 1964 indicated that in 1961 Tattoo Peter went to work with Tattoo Ole in Copenhagen and that Tattoo Peter had been tattooing for 30 years before joining Ole.

In that same issue there was another story about Rich Mingins visiting Tattoo Peter in 1964. "During the day Peter showed them Holland from the comforts of his Mercedes-Benz and at night the night life of Amsterdam. Therese, (Peter's wife) is Parisian and, everyone agreed, a second Edith Piaf. When she sang in one of the clubs one could have heard a pin drop during her singing."

It is unclear when Tattoo Peter left Copenhagen, but he worked in at least two locations in Amsterdam at St. Olofssteeg and later Nieuwe Brugsteeg #28. Tattoo Peter walked with a limp and carried a cane. He is said to have stepped on a mine and lost his leg in the explosion. Peter's tattooing style was classic old school, bold line/solid color. Like Tattoo Ole, Tattoo Peter's tattooing was influenced by the American master August "Cap" Coleman of Norfolk VA.