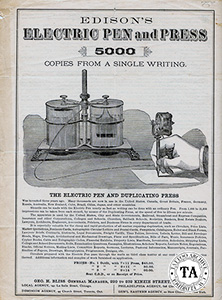 Better known as "The Wizard of Menlo Park," Thomas Alva Edison touched all of our lives in one way or another. As tattooists we owe him a great debt because of his work in the late 1800s on the perforating pen. Tattooist Samuel O'Reilly later picked up this idea and transformed it into the first electric tattoo machine.

Ten years ago, while doing research on the tattoo machine we came across Edison's 1876 and 1877 patents. They were a big influence on O'Reilly's 1891 and later, on Wagner's 1904 machines. Just recently we came across two 1878 patents by Edison that to our knowledge have not been seen by the tattoo world.

Patent #203,329, was designed to operate using treadle power passing through a series of wheels to increase the RPMs. Power was then transmitted through U joints to a gear assembly in the hand-held portion of the machine. This power then moved to the needle bar through a cam or eccentric and created a reciprocating motion. With all the shafts and U joints, this machine looks to be fairly heavy and would not lend itself to tattooing very easily.

Another of Edison's Patents, #205,370 was designed to operate by using air, gas, water, or other fluids as the motor for actuating the reciprocating needle bar. Edison felt that this would reduce its weight, making it easier to use. In the related text, Edison even suggested the idea of using a flexible tube with a mouthpiece, so that the person using the instrument could blow into the tube and the case rotating the fan-wheel. It is unknown whether a machine was manufactured using this patent design.

Edison, like other inventors of his day, had a talented team of workers at his side to help him carry out his experiments. A.B. Dick bought the manufacturing rights to Edison's 1876 patent after the Western Electric Company had made quite a business of selling these pens. In a letter written in 1987, the A.B. Dick Company stated, "This was the first electric motor to be manufactured commercially and sold in large qualities. At one time more than 60,000 were in use." Where are all those machines today?