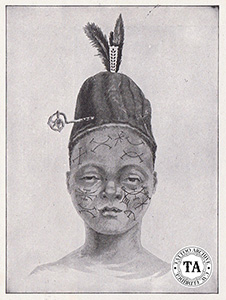 Ekoi are African natives located in the extreme southeastern part of Nigeria. Ekoi women have the custom of unusual face painting. The Ekoi believe that since their ancestors were the first to settle this land, newcomers can only purchase settlement rights rather than own their own land.

Before the British stepped in, the Ekoi had a secret society that influenced social and religious matters. This society called "egbo" had it own written language of pictograms called "nsibini". Variations of this language are found in other Nigerian groups. Researchers think this language died out because as it was popular with secret societies it was kept underground.