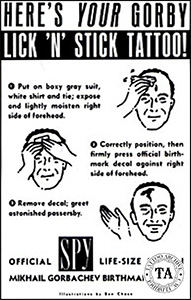 Born March 2, 1931, this son of a peasant rose through the ranks of the Soviet Government and, in 1985, become the General Secretary of the Communist Party. Gorbachev earned his law degree from Moscow State University in 1955 and held many positions in the Party, before becoming the General Secretary. Gorbachev was born with a port wine birth mark on the right side of his forehead and official government photographs of him were retouched to hide his birthmark. In more recent photographs however, his birthmark is clearly visible. Temporary tattoo of Mikhail Gorbachev's Birthmark One of the latest temporary tattoos in the Archive's collection.