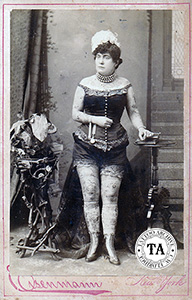 If you have done much research on tattoo attractions from the late 1800s and early 1900s, you have read some truly fantastic stories. It was the norm during this period for attractions to invent tall tales to explain how they found themselves on the sideshow stage. But Nora Hildebrandt’s story may take the cake.

In a pamphlet that would be sold during her appearances she’d tell this story: She was born in Melbourne, Australia in 1860. Her father abandoned the family and her mother died so Nora sailed to America in 1866 to meet her father. He was a seaman/tattooist so Nora was put into a private school in New York until 1878. After Nora finished school she traveled to Salt Lake City to meet her father and they headed out on horseback to the White Pine Reservation. On the sixth day of their journey they were attacked by “red skin devils” that included Sitting Bull himself. They were taken to Sitting Bull’s camp where the father was sentenced to burning at the stake and Nora was to become Sitting Bull’s “white squaw.”

As the Indians were tying Nora’s father to the stake, they noticed his tattoos and Sitting Bull said he would assure their freedom if he tattooed his warriors. One of the warriors accused Nora’s father of trying to poison them so Sitting Bull changed his mind and promised their freedom if the father would tattoo Nora from head to toe. Nora, trying to save her father’s life, convinced him to do the tattooing. Nora was then tied to a tree and the tattooing started. Working six hours a day for a year he completed three hundred sixty-five designs on his daughter.

That year was not without other problems during the tattooing. Nora went blind. The story went on to say that her father broke his tattooing needle as an excuse to stop the tattooing. Nora’s father was quickly seized and burned at the stake. Miraculously three weeks after her father’s death Nora Hildebrandt was rescued by the famed Indian fighter General George Crooke. While recovering in a Denver Colorado hospital Nora was approached by circus owned Adam Forepaugh and Mr. W.K. Leary. Leary was perhaps Forepaugh’s partner. Mr. Leary assured Nora that her sight could be restored if she went to Bellevue Hospital in New York City. Nora was broke but Mr. Leary offered to foot the bill and sure enough her sight returned. With her sight restored Nora was courted by showmen from all over the country trying to make arrangements for her to exhibit in their dime-museums. Not surprisingly, Mr. Leary was appointed as Nora’s agent and plans were made for her to appear at G.B. Bunnell Museum at Broadway and Ninth street in New York City. The engagement was for one year starting on March 1, 1882 with a salary of one hundred dollars a week. The pamphlet concluded with this: “Since then Nora has exhibited in all the principal cities of Europe and America. This history is founded on facts and written by herself, Miss Nora L. Hildebrandt.”

Quite a tale! And we are sure this story worked for Nora Hildebrant in many ways. It would make great print copy so the press would be drawn to her. It would appeal to sympathetic audiences and perhaps encourage them to buy more pitch cards and pamphlets as a way to help the poor, tortured woman. And lastly is the idea that since the tattoos were put on by force, it excused any thoughts of Nora Hildebrandt being a loose or flighty woman that would have been so condemned during this period in American culture.

For more on Nora Hildebrandt see The Tattooed Lady by Amelia Klem Osterud.