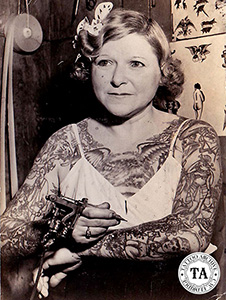 From the 1840s up to the 1960s (when tattooing was banned in New York City), the Bowery and the City itself was a Mecca for tattooing. The list of tattooists that worked there reads like a Who’s Who of the tattoo world. Many tattooists during those years were just passing through the City, but a few stayed and made it their home. During this time the tattooists were almost all men. Mildred Hull was the one major exception. Affectionately known as Millie, she was one of the few women to work on the Bowery in New York City. Her #16 Bowery shop was located in a barbershop. Several New York City tattooists worked like this, including Charlie Wagner. Old time tattooists were famous for setting up in closet-sized locations in arcades, under stairways, and even in horse-drawn wagons. A barbershop with a clean space, a male customer base, and a corner for rent was reason enough.

Mildred starts the story, “Ushered into the world 37 years ago on April 23, on a tough, tenement-choked Hamilton Street, not far from my present establishment, I was a sturdy little urchin from the word go. School never made a hit with me. After attending Transfiguration R. C. Parochial School and Public School 117, I quit cold at the age of 13. I don’t think the authorities shed many tears. They saw very little of me anyway. My resignation made my absence official.”

“The operator of the tattoo parlor saw an opportunity to bleed me dry financially. I had a few weak spells as a result of the tattooing, but mainly I suffered anemia of the bankroll. The sideshow tout told me I was a sap to be like the other girls. Why, if I’d get tattooed all over I could make $80 a week with the circus, and that would be only the start. The figures made me a trifle dizzy.”

“They started with my arms. Two more treatments disposed of my legs as low as my instep. Spaced by days, there followed two applications on my thighs, the operation feeling like a mild burn as long as the needles made contact with my flesh. Then there were four more treatments, delicate, painstaking, on my sides and back. And finally color ran riot on my chest. Was I embarrassed to have these men treat my body? What does a woman do when she visits a doctor?”

The 1930's postcard seen here shows Millie with her favorite square back Jonesy. On the back of the postcard, she is referred to as Mary and states that she is a member of the famous "Butterfly Club" complete with an illustration of the required membership tattoo.

Millie committed suicide by poison in a Bowery restaurant in 1947.

The text above is an excerpt from The Life & Times: Milldred Hull booklet. Look for it in our online store.