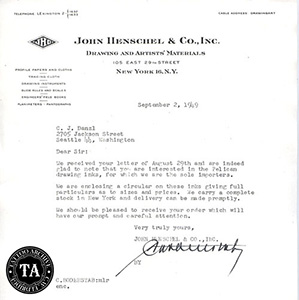 The word ink comes from the Greek word "kauterion" (meaning branding iron), which was used to fix fast the wax colors in paintings. In Latin this process was called "encaustum" and enque in French. The English changed the word to "enke" or "inke".

More than four thousand years ago both the Egyptians and the Chinese learned to make lasting black ink. They mixed lampblack or charcoal with various gums and added water to this when using ink. This ink could be wiped off with a sponge; in fact, if an Egyptian writer made a mistake, he would lick off the ink with his tongue. For many centuries carbon in some form was the basis of all black inks. Today China or India ink is made on the same principle. Other early inks contained colored juices or extracts of plants or animals.

Centuries later, the Romans were still using this same kind of ink. In addition Romans perfected the method of getting ink from the squid. When a squid is disturbed it sends out a dark brown liquid to make a kind of smoke screen or camouflage itself. The Romans found that they could write with this brown fluid, which we call sepia.

About 1,000 years ago a new kind of ink was discovered. This ink was made from the galls found on oak trees. Insects would lay their eggs in twigs near the oak tree and wood lumps, known as galls, grew around these eggs. The galls contained tannin which when mixed with certain chemicals, form excellent ink. During the Middle Ages every writer had his own recipe for ink. Examinations of documents written with these inks are as clear today as when they were first written.

Modern India ink contains carbon black dispersed in water. Other materials are usually added to keep the carbon from settling out and to help the ink stay more firmly on the paper.