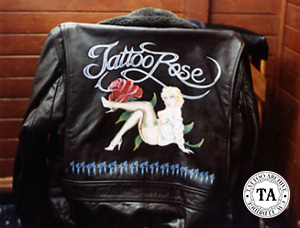 Gregory Rodman Irons was born September 29, 1947 in Philadelphia, Pennsylvania. His father was in advertising and his mother was a registered nurse. Greg attended Upper Marion High School up until the 10th grade and was involved in just about every aspect of the school newspaper. Greg's brother Mark said that Greg displayed intense interest in art at an early age, even at the risk of spankings. "He used to scribble all over the walls when he was young, and mother would wash them off and tell him to stop. Then one day, she moved the bed to vacuum under it, and she saw that Greg had crawled under the bed to draw all over the baseboards there." Greg was a self-taught artist, whose early influences were the Mad pocket book reprints featuring Kurtzman, Elder, Wood, and Davis.

Irons moved to San Francisco during the winter of 1967 and created a rock poster for a band playing at the ballroom, The Western Front. With this printed poster in hand, Irons went to see Bill Graham and got an art gig for an upcoming concert at the Fillmore Auditorium. Ultimately, Bill Graham Productions commissioned Irons for a series of posters for great bands of that era, including Moby Grape, Paul Butterfield, Jefferson Airplane, Crosby-Stills-Nash & Young, Albert King and Santana, to name just a few. Many of these posters can be seen in the book The Art of Rock.

1968 found Irons in London doing animation and working on the Beatle's classic animated film Yellow Submarine. On his return to San Francisco in 1969, he resumed his work on rock posters for Bill Graham's Fillmore Auditorium and Chet Helm's The Family Dog and began designing album covers for Mercury Records and Bill Graham's Fillmore label. During this period he produced promotional material for Jefferson Airplane's label, Grunt Records. One of my favorite album covers was the one he did for Jerry Garcia's bluegrass band, Old and In the Way. This album has been re-issued with the original Irons's artwork. Look for it!

Poster and album work eventually led to Irons being published in Yellow Dog, a Print Mint commix where he was invited by Bob Rita to do a comix of his own. This resulted in Heavy, published in 1969 and a second comix Light, followed soon after.

The 1970s found Irons illustrating Tom Veitch's stories. Ron Turner of Last Gasp published a lot of this material and it was there that Irons began producing regularly. Last Gasp's first book, Slow Death #1, which came out on the first Earth Day April 1, 1970, featured an Irons's cover. One of the more obscure collaborations with Veitch was The Mick Jagger Story, about Jagger's testicles being snipped off by a groupie. The story was ready to be published by Rolling Stone when Jagger got wind of it and put a stop to it. It was eventually published in the newspaper Organ.

Although Irons took a lot of heat for the sex and violence in his work, he was not afraid to tackle social issues. His Auto-Be Recycled was a commentary on the wastefulness of the auto salvage industry, cover seen below. The Legion of Charlies tackled the Charles Manson story and the Town That Fought To Save Itself was commentary about the environment. He also did a piece on the horrors of whaling and Slow Death #10 was about cancer.

Irons felt that the reason he never received the recognition enjoyed by some of his contemporaries in the comix world was because he did not have a continuing character for readers to follow, such as R. Crumb's Mr. Natural or Gilbert Shelton's Freak Brothers. Irons's did have Gregor, the Purple-Assed Baboon. This was a character that Irons felt was a metaphor for him. However, it wasn't until his later years that he used Gregor in his art.

In an interview with Cascade Comix #19 Irons talked about Gregor:"His name is Gregor. Like Gregor Samsa in "The Metamorphosis". He was a cockroach, but this guy is a baboon. He's not really a baboon, he's a mandrill, but I call him a baboon. A lot of the writers and people that I like talk about monkeys in different places, like William Burroughs.... it's just an image that struck me."

By the mid 1970s, the underground comix business began to fall off and Irons started doing more book illustrations. This work paid better than comix and during these years Greg worked for Troubadour Press and Sunset Books as well as doing a series of coloring books for Bellerophon Books. It was around this time that Irons began to move into the tattoo business. He had been tattooed many years earlier and admitted that tattoos had always fascinated him. His first tattoo, done in the 1960s, was the word "tattoo" on his left forearm.

Guitarist Peter Kaukonen recalled returning from a Jefferson Starship tour in 1972 with new tattoo work from Thom deVita of New York City. Peter said that when Greg saw this work and heard what Peter had paid for it, he began thinking about doing tattoos for a living. Greg's first tattoo equipment was mail ordered from Spaulding/Rogers around 1975. His first tattoo (that he did on himself) was crows and a skull on his right ankle. Peter is the proud owner of Greg's second tattoo, a Japanese style frog. Greg was doing this tattooing at his house but soon realized that he needed to get into a shop situation to really learn the art. This led to the start of his professional tattoo career in 1980 at Dean Dennis's shop at #394 Broadway in San Francisco.

Dean Dennis had learned the trade from Lyle Tuttle in the mid 70s at the #30 Seventh Street shop, before opening his own place at #1523 and later #1543 Webster Street in Alameda, California. This location was just minutes from Dean's San Francisco home, as well as being home port to many navel personnel. Dean worked in Alameda for several years before leasing the #394 Broadway shop.

At this time I (C. W. Eldridge) was working in Calgary, Canada with Paul Jeffries. I left there on Christmas Day 1979 to work with Dean when he offered me a job at his new location. We started to work on the shop right away. The #394 Broadway storefront doesn't exist today, but at that time it was located between the Mystic Eye (occult supplies) and the Tibet Shop (Himalayan head shop). Affording views of the Transamerica Pyramid, San Francisco Bay and the topless clubs of North Beach, we thought it to be just about the perfect tattoo shop location in the world!

The storefront itself was an old meat market equipped with a metal rail near the ceiling (for sliding animal carcasses) and a wooden freezer box. We cut a large window in the side of the freezer box and set up our tattoo stands in the freezer itself. Being a large shop, we were able to put a small gallery space in the waiting area and held art shows by artists like Dave Mann and D.E. Hardy. At first Dean and I worked alone in the shop but in the years that followed, Terry Tweed and Leo Zulueta worked there as well. Ed Nolte, then silk screener extraordinaire, first introduced Greg to Dean. Ed had been doing the silk screening for the newly formed Last Gasp Comix in San Francisco. Nolte had known Greg since the 1960s and had printed many of Greg's designs on T-shirts. By the 1970s, Ed was doing a lot of silk screening for San Francisco tattoo shops and knew of Greg's interest in tattooing. It was during one of the Barbary Coast Gallery shows that he introduced Irons to Dean. From this meeting Greg was offered a chance to get into the tattoo business.

Greg started working the six to midnight shifts at the #394 location. It was soon very obvious that Greg was going to quickly move up through the ranks. All those years of poster and comix artwork served him well in the tattoo world. He had developed a drawing style that lent itself naturally to tattooing. It was during this time at Dean's that Greg drew up his first flash set to be produced for sale. This four-sheet set was never produced, but some of the designs ended up on the 1982 set that he did with Pete Stephens.

Greg worked at Dean's for a year or so and then went north to work at the Tattoo Emporium in Seattle, Washington with C.J. Danzl and Pete Stephens. This connection with Stephens produced two of the most sought after sets of flash in the 1980s. The photo to the right is an example of Greg's tattooing.

Late 1982 found Irons back in San Francisco tattooing for Henry Goldfield at #404 Broadway. Seen below is a flyer that Greg did while working with Henry Goldfield. During these years Greg built up a loyal following, tattooing at, and designing t-shirts for most of the American conventions. Greg put out a very well received second set of flash in 1984. By this time, he was having a big influence on the tattoo world; his flash designs were beginning to show up everywhere. It was not since Mike Malone in the 1970s, that one person so changed the look of U.S. tattooing with their production flash.

After a couple of years tattooing on Broadway, Greg developed an ulcer and was in need of a vacation (even if it was a working one). He went to Europe for a bit of R&R in Amsterdam, followed by a month or so of tattooing with Tattoo Bertje in Oostende, Belgium. Greg arrived back in the States in time to attend the September 1984 tattoo convention in Houston, Texas. He shared a booth with the Tattoo Archive , and as always, Greg's tattooing was in great demand. Having a work ethic that was unmatched, Greg would be one of the first on the convention floor in the morning and one of the last to leave at night. Greg was able to make enough money from this convention to take his dream vacation to Thailand. Just before leaving for Thailand, Greg was offered a position at D.E. Hardy's world famous Realistic Studio in San Francisco. He was very excited about this opportunity and produced several back piece designs to be hung in the shop on his return.

On November 14, 1984 Greg was hit and killed by a city bus in Bangkok. As fate would have it, Greg had just received a magic tattoo from a Buddhist monk in Chiang Mai. In a postcard written at that time he said,"The tattoo came complete with religious ceremony at a monastery in the out-back, took three days to negotiate, but worth it. The 100 year old monk blessed it and gave me a secret mantra to go with it." So much for magic tattoos!

Gregory Rodman Irons was laid to rest with a Buddhist ceremony at the Berkeley Buddhist Temple on November 24, 1984. The Rev. Kusada read passages from the Sutra, Iron's name was then offered, and friends and relatives took incense and spoke some thoughts of him, sprinkling his cremated remains with incense.

Want to learn more about Greg Irons? Check out the publication Greg Irons: The Tattoo Years in our online store.