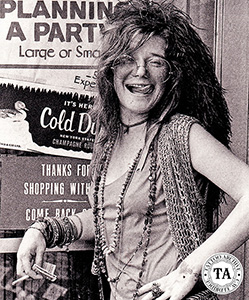 One of the great female singers in rock history was also one of the first to use tattoos as part of her image. Janis Lyn Joplin was born January 19, 1943 in Port Arthur, Texas and started her singing career in the country and western genre while still in Texas.

In 1966 she joined the San Francisco based Big Brother and the Holding Company and two years later recorded the classic Cheap Thrills. This became a million seller in a matter of months and Janis' fate was sealed. Most critics felt she overpowered the band and soon she went out on her own.

In 1970 Janis came to Hollywood to record a new album Pearl for Columbia Records. On October 4, 1970, at the age of 27, she was found dead at the Landmark Hotel with fresh needle marks in her arm. She died before completing the album.

Janis proudly wore her tattoos that were done at Lyle Tuttle's shop on Seventh Street in San Francisco. The designs were a Florentine bracelet on one wrist, and small heart design on her breast. "It was just a trip," said Janis, who happily discussed and displayed her tattoos for the San Francisco Chronicle and viewers of the Dick Cavett Show, among others. "I wanted some decoration. See, the one on my wrist is for everybody; the one on my tit is for me and my friends." She paused and chuckled, "Just a little treat for the boys, like icing on the cake." Shortly after her own decoration, Janis threw a party in her Mill Valley house, and Lyle was the chief attraction. This resulted in a number of her friends following suit. Lyle stated in a Rolling Stone article that after Janis' death in October 1970, he tattooed replicas of the Janis' heart on more than 100 young female fans.