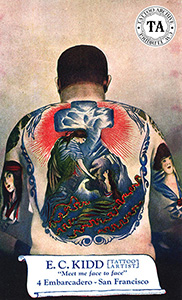 E.C. Kidd, a west coast tattooist is best known for his years in San Francisco. Kidd worked on the Embarcadero at #4 and #26 with Brooklyn Joe Lieber and C.J. Eddy. These tattoo locations were as close to the San Francisco Bay as any in the city's history. It was also very near to the Ferry Building, the hub of transportation in San Francisco. The Ferry Building that stands today was built in 1898 and was the terminal for trains, ferry boats and trolley cars around the turn of the century. Because of the number of people moving through this part of town it was a prime location for a tattoo shop.

A photo of an E.C. Kidd machine surfaced recently; we call it that because of the name stamped in the up-right. It is unknown if he built it or not. I had never seen one quite like it although the frame was similar to a Waters' or Jensen frame. It was a cast frame with a yoke, designed for connector cords and had a super tube crusher vice and a one-piece spring. The most unique feature of the machine was the wedge shaped bottom of the frame. It tapered from the back of the frame (about 1/8 inch) to the tube vice (about 3/8 inch.)

In the 1940's Kidd produced a color postcard showing his great Joe Lieber's Rock of Ages back piece. At this time Kidd was tattooing at #4 Embarcadero and the by-line on the card said, "Meet me face to face." Ironically to date we have never seen a photograph of E.C. Kidd's face.