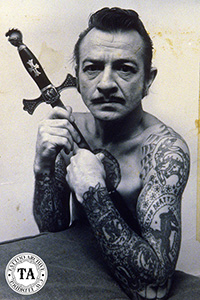 In case you missed it Saturday, February 25, 2012 was the sixth annual celebration of World Sword Swallowing Day. I must admit that it slipped by me. The Sword Swallowers Association International (SSAI) President Dan Meyer started this annual event to raise awareness of sword swallowers around the world. The event was co-sponsored by Ripley's Believe It or Not and February 25th was chosen to work in conjunction with the National Swallowing Disorders Month. This may sound like a Saturday Night Live skit, but I assure you these forks are serious.

The only professional sword swallower I have ever known is the legendary Capt. Don Leslie, aka Mr. Circus Side Show. I had the pleasure of meeting him when he made the move from the east to the west coast, he was working out of San Francisco and would visit our shop in Berkeley.

Don started swallowing swords under the guidance of Carlos Leal on the Cristiani Bros. Circus in the 1950s. In Madame Chinchilla landmark biography of Capt. Don, he said that he spent hours over the toilet thrusting his finger down his throat in an effort to get past his gag reflex. The Capt. started with screwdrivers, serving spoon handles, knives, sabers, oilsticks.

The Capt. said that he was 18 when he finally successfully got a sword down.

By the Captain's own admission Leal was not a great sword swallower and it was no until Capt. Don met Alex Linton did he learn the finer points of sword swallowing. Alex Linton, who was born in 1904 is said to have learned sword swallowing from his father at the age of 12. Linton worked with most of the major circus in America and at one time held the Guinness World Record for swallowing four 27-inch blades. It is thought that Alex Linton only taught two people to swallow swords, Capt. Don and Bobby Reynolds. An interesting side light about Linton is that he was heavily tattooed, but to our knowledge he never worked as a tattooed man.

Through the years Capt. Don worked with several circus and carnivals including the Ringling Bros., King Bros., Cristiani Bros., Clyde Beatty Cole Bros., Circus Bruno, Harmur Shows, Conklin Shows and others. His acts included, Fire Eater, Human Pin Cushion, Human Blockhead, Escape Artist, Tattooed Attraction, Electric Chair, Bed of Machetes, Bed of Glass, Bed of Nails, Side Show Manager, Master of Ceremonies and if need I am sure he had a couple of other tricks up his sleeve.

But his first love was sword swallowing, even after some close call with the swords he continued to work them into his stage act. As dangerous as sword swallowing is, it was eating fire that killed the Capt. The lead in the gasoline that he used for this act gave him cancer of the throat and jaw. Capt. Don Leslie died June 7th 2007.