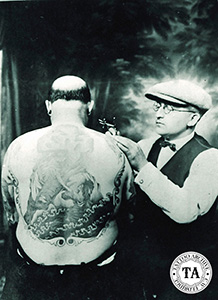 t is unclear how Lieber came by the nickname "Brooklyn Joe", as all the material in the Archive shows him working on the West Coast. In Albert Parry's 1933 book Tattoo, Lieber , a San Francisco tattooist, was listed as one of the best tattooists in the United States. Lieber was known to have worked with C.J. Eddy and E.C. Kidd at their #4 Embarcadero shop. Several business cards on file in the Archive have Lieber working in Oakland, California.

During the WW II Oakland, California was a major tattoo center on the west coast, with a half a dozen shops between 10th and 12th on Broadway and Franklin Streets in downtown. "Brooklyn Joe" worked at the Fun Center Arcade at 1012 Broadway. He must have been there for a several years, because we have two business cards from that location on file.

One says 40 years experience and the other lists 45 years experience. These cards are probably from the 1940s. Joe Lieber later worked with Doc Jones, who is better known as Davy Jones at #461-10th Street.