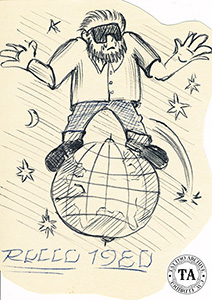 Mike Malone led one of those lives that you read about in books. Mike was born in California and after high school he studied ceramics, learned carpentry, became a licensed barber, did light shows for a 1960's rock ballroom, worked as a photographer -- and all before meeting Thom de Vita with his Paul Rogers tattooing! Meeting de Vita awakened him to the beauty of tattoo art and it was not long before he was tattooing in his apartment in New York City. The thoroughly modern New York City still had a ban on tattooing that forced tattooists underground. Malone worked with the Museum of American Folk Art in New York City on their 1971 tattoo exhibition. From there he moved west to San Diego and worked with Zeke Owens at his Ace Tattoo shop. As fate would have it, after Sailor Jerry Collins death in 1973, Malone had the chance to buy Sailor Jerry's famous Hotel Street shop. Malone jumped at that chance, renamed it China Sea Tattoo Company and maintained that shop until 2001.

While on Hotel Street Malone carried on the grand tradition that Sailor Jerry started so many years before: good, solid, clean, creative tattooing. During this period Malone started his tattoo flash business that he called Mr. Flash and his t-shirt business, which he called Mr. Lucky. Both of these businesses were a big success; in fact, the flash business changed the look of tattoo shops around the world. Malone spent a lot of time around Paul Rogers learning the ins and outs of machine building and used this knowledge to build custom machines for many tattooists.

The mid 1980s found Mike Malone living in Austin, Texas, first working with Dave Lum and later having his own shop. He continued his flash and t-shirt business there, did covers for the local underground and did some of his best and largest tattoos. In the 1990s Malone worked with long time friend Don Ed Hardy and produced two great Sailor Jerry flash books and licensed many Sailor Jerry designs that were reproduced on clothing, bags, lighters, posters etc.

Malone moved back to Honolulu for a short period and later to Minnesota, opening the Aloha Monkey shop in Burnsville, Minnesota. He next relocated to Chicago working with Keith Underwood at his Taylor Street shop. In 2002 Hardy Marks Publishing printed Bull's Eyes and Black Eyes showcasing Mike Malone’s tattooing and painting.

Mike ended his life as he lived it, on his own terms, with a self inflicted gun shot wound April 17th, 2007 in his Chicago home. A copy of his Obituary from the New York Times is made available here.

"I am not really worried too much about my place in history. I mean, I guess I'll have a little place in the history of tattooing in this particular time slot. But that's not what gets me coming down here in the morning. I like the work." - Mike Malone