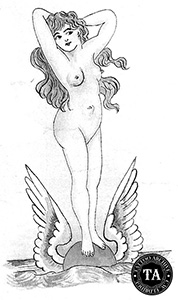 The military prefer their men without tattoos of naked women. The tattooed lady can still join whichever branch of the service her wearer chooses so long as she does not display her charms too flagrantly.

The United States Government issued a recruiting circular in 1909, which stated, "Indecent or obscene tattooing is cause for rejection, the applicant should be given an opportunity to alter the design, in which event he may, if otherwise qualified, be accepted."

In the 1940s this obscure ruling caused one of the biggest booms the tattoo trade had known in years. From far and wide, eligible young men flocked to their favorite tattooist with demands for lingerie, skirts, brassieres, fans, bubbles, flowers, and butterflies -- almost anything that would cover up a bare spot.

"Why?" exclaimed Charlie Wagner, who was reckoned the dean of American tattooing and who practiced his art on New York's famed Bowery. "It's been just like old-home week around here since Pearl Harbor. He added, "Could you imagine how a store clerk would feel in a town where everybody's clothes wore out at the same time? That's how I've been feeling. For going on 50 years, I've been turning out tattooed ladies, most of them naked, and now all I do is cover them up."

An interesting sidelight to the Navy's enforcement of its regulation was seen in the early 1940s when Charlie Wagner found himself in New York's Magistrate's Court on a charge of violating the Sanitary Code. Wagner told the judge he was doing "essential war work," tattooing clothes on naked women. He explained that lots of fellows who've had unabashed nudes needled into their skin now wanted to get into the Navy, whose rules stated that first they must get their girls dressed up. The Magistrate let Charlie off with a $10.00 fine and a warning to clean up his tattoo parlor on Chatham Square and Charlie went back to work.