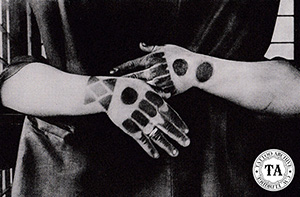 Okinawa is the largest and some say, the most important of the Ryukyu Islands. This island chain is strung-out over the far western Pacific Ocean between Japan and Formosa. At one time the Ryukyu archipelago was a kingdom in its own right. Invaded by Japanese warriors in 1609, Okinawa was made a Japanese prefecture in 1879. Japan's defeat in World War II led to US occupation until the islands reverted back to Japan in 1972.

In 1997, 1.27 million Okinawans shared their land with 28,000 American military people stationed at 38 sites. The importance of these bases for the United States military is easy to understand. These islands are located just off the coast of Russia, China, and North Korea.

Tattoo legend tells that once a Japanese nobleman wished to carry off a Rukyuan princess. She secretly tattooed her hands and arms with purple dye so her suitor believed she had contracted a skin disease and gave up his plan. Tattooing then became fashionable among island women, and each family had its individual pattern. When the Japanese took over the Ryukyus in 1879, they made tattooing illegal.