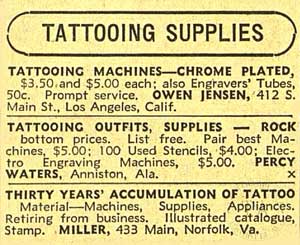 While working on a piece on George Burchett, we stumbled across one of his supply flyers that billed him as “The Oldest Established Outfitter.” What a quaint old-world term for a supplier! Looking at Burchett’s flyer we saw that at least half of it was devoted to outfits; both hand and electrical, and all were priced according to the amount of gear included. This got us to thinking, when and why did the term outfits get superseded by kits and starter kits? Could it be those same folks that coined the phrases “tramp stamp” and “tat gun?”

The dictionary defines outfit as “an assemblage of articles that equip a person for a particular task, role, trade, etc.” That seems to describe Burchett’s offerings pretty well. We could not find a definition for the term “starter kit” but further digging online resulted in a list of web results, which included tax planning starter kits and a starter kit from Target. Amazingly there were no tattoo starter kits in these listings. But if you Google “tattoo starter kits” over a quarter of a million results come up.

When the new generations of tattooists were coming on the scene, suppliers continued to look for new ways to promote their gear. In the late 1960s and early 1970s, pop culture magazines like Soldier of Fortune and Rolling Stone offered the perfect advertising opportunities. Tattoo suppliers had used magazines like Popular Mechanics and Police Gazette for years, but this 1960s expansion did not set well with old school tattooists and there were stories of suppliers receiving death threats over their new aggressive advertising policies.

It appears that greedy suppliers who wanted to capitalize on the tattoo boom thought “outfits” did not quite cover the meaning they wanted to convey to their potential customers. Thinking the term “outfits” a bit old-fashioned, in the 1960s they dreamt up the term “starter kits. Some suppliers rebranded their outfits “starter kits” because they were wise enough to know that there were not enough apprenticeships available for the number of people that wanted to become tattooists.

Today the Chinese have reinvented the idea of the starter kit, which begins for the low, low price of $50.00 (or less) and makes it affordable for an aspiring tattoo artist to get the basic gear needed for tattooing. Many of the past arguments that starter kits do not including a sterilizer have been overcome with the addition of disposable needles and tubes. Traditionally tattoo suppliers were tattooists. Although some used to say, “If you can’t tattoo then you supply.” I never subscribed to that thinking. Professional suppliers, and that is to say suppliers that have some moral compass, have stepped away from outfits and/or starter kits.