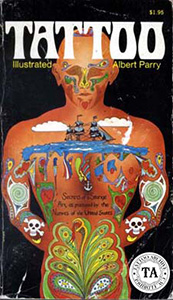 Albert Parry was the author of the landmark 1933 book called, Tattoo, Secrets of a Strange Art as Practised by the Natives of the United States. Parry's book caused a sensation when it was published and many reviews and excerpts were printed in magazines such as Esquire, American Mercury, Modern Mechanic and Scientific American. Most of these reviews focused on the startling revelation that tattooing and sex were connected.

Following is Phil Sparrow's (also known as Samuel Steward) comments about this book.

"Parry, writing in 1933, was one of the first devotes of Freud, and was Freudian terminology to tattooing He interviewed a vast number of tattooists then alive, and like many journalists, accepted the tales they told him without any attempt at verification. His book so infuriated the few tattoo artists literate enough to read it and understand what he was saying that one and all denounced him for doing their art a great disservice. The fact remains that time has proved a large number of Parry's conclusions to be sound, and his book remains a milestone in the general literature of tattooing."

Following is the Scientific American’s review from February 1934.

"The author's subhead of this curious and intriguing book at once attracts attention: "Secrets of a Strange Art as Practiced by the Natives of the United States." Beautifully illustrated with three color-plates and numerous half-tone reproductions, the book accomplished its avowed purpose of getting under the skin of the skin game. The reasons for having tattoo applied to one's person are proved to be essentially psychological, whatever the expressed reason of the tattooee may be. Mr. Parry, supported by the assertions of authorities in the field of psychology, shows that there is a close link between tattooing and sex. There is a definite erotic basic for the practice of the art, and the author follows the line of reasoning with skill and tact. Such is the subject matter that parts of the book becomes hilariously humorous, but never gets out of hand, and are always done with good taste in keeping with the vast amount of serious research that preceded the writing of the volume. If you have ever been tattooed and it is shown that a surprisingly large number of men and women have - or have ever seen examples of the art, you will want to read this book both for its deep human interest and the amazing information that is revealed. There is a valuable chapter on the removal of tattoo marks. Beautifully printed on fine paper with illustrations inserted 6 1/4 by 9 1/2 inches, carefully bound in stiff cloth covers. $3.20 postpaid."