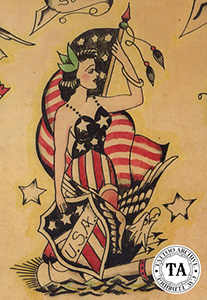 The pin-up is perhaps the most classic tattoo design found on a tattoo shop's wall any place you might travel in the world today, You might ask, what's the difference between a pin-up and a nude? Is it attitude, style or posture? Is a woman sexier partially clothed (like the pin-up girl) or with no clothing at all (like the nude)? Webster's dictionary describes the pin-up as, "A picture, especially of a sexually attractive person, that is displayed on a wall." Similarly, a nude is described as "An unclothed human figure, especially an artistic representation". Maybe that's the difference. Pin-ups are displayed on walls in barracks and garages, while nudes are hung in frames on walls in galleries and museums. Probably the real difference is the way people view them.

In the early part of the 20th century the United States Navy official manual stated that: "a cause for rejection (from the service) is obscene, offensive or indecent tattooing". This was the death to many naked girls tattooed on recruits who had to have them covered with clothing if they wanted to enlist. Following is a New York Times article from 1944. "Charles Wagner's contribution to the war - tattooing skirts on nude figures ornamenting the arms and chests of would be sailors wasn't sufficient to ward off a $10.00 fine yesterday in Bowery Court, where he was found guilty of failing to sterilize his needles. Wagner, 67 years old and a Chinatown institution for forty years, pointed out that many a marine or sailor now at grip with the enemy would have been rejected because of the crude 'art' on their bodies".

In a 1977 interview, Bert Grimm accurately summed up what he thought men were looking for with pin-ups. "They wanted the girls to have enormous but shapely and protruding breasts. They wanted something to turn them on. They wanted erotic, not to say obscene, designs of women of all races and occupations, including ones of Red Cross nurses, the Statue of Liberty, and an oversexed Amelia Earhart. Some men had nude hula girls strategically placed on their biceps and when the guy moved his arm muscle in a certain way, the gals hips would wiggle and her breasts would bounce. Sometimes the guy would whistle a tune to go along with the dance. I used to have about 15 sheets of girlie stencils hanging up, now I have only two. I took the other ones down because they don't sell".

The whole tone of this 1977 interview appeared to indicate that pin-ups were on their way out. In the tattoo business today, even with our politically correct climate, pin-ups are still popular. Thanks to the renewed interest in old-school designs, especially Joe Lieber's and Sailor Jerry's work, the pin-up has been rediscovered. Several other tattooists influenced Jerry in his pin-up design. On stencil rubs sent to Paul Rogers, Jerry credited Pinky Yun, Ole Hansen and Doc Forbes as the source of pin-up designs that he then reworked into his own style. This style distilled the human form into the bare minimum of lines and is still copied, and perhaps even worshipped today.