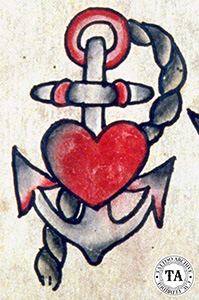 This week a local news item out of Morehead City, North Carolina caught my eye about the recovery of 2,500-pound anchor from a ballast pile that is believed to be the wreck of the Queen Anne's Revenge. This site is listed on the National Register of Historical Sites and has already yielded more than 250,000 artifacts.

As you may remember Blackbeard, aka Edward Thatch or Teach, is from what is ironically called the Golden Age of Piracy. Little is known about his early life but by the early 1700's he was a privateer in Queen Anne's War (1701-1714) and turned to piracy after this war. In 1717 in the eastern Caribbean, Blackbeard and his crew captured the French slave ship La-Concorde, a superior ship than what he was currently sailing on. The La-Concorde was converted into his flagship and renamed Queen Anne's Revenge. With a bigger and better armed ship, Blackbeard continued cruising the Caribbean taking treasures. Records show that by May 1718 Blackbeard had arrived off the coast of Charleston, South Carolina. He blockaded the port for nearly a week, seized ships, took hostages, and demanded a chest of medicine for the hostages' release. Blackbeard then moved further up the coast and attempted to enter Beaufort Inlet in North Carolina. It was here the Queen Anne's Revenge ran a-ground and was abandoned; she has lain there for near 300 years.

As fate would have it Blackbeard's pirate career ended six months later when he was killed by an armed contingent led by Royal Navy's Lieutenant Robert Haynard. Maynard returned to Virginia with Blackbeard's severed head hanging from his sloop's bowsprit.

The anchor that was recovered is believed to be the second largest on the ballast pile where it was found, measuring approximately 13 feet long with arms 8 feet wide. The experts said of the recovery process, "It couldn't have gone any better."

Anchor designs have been a main stay in the tattoo business since the beginning of our art form; with this article we have included a few classic anchor designs.