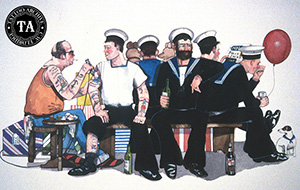 Samuel O' Reilly, a famed tattooist in New York City, once stated, "A Sailor without a tattoo is like a ship without grog: not seaworthy."

A few of us in the tattoo business are fortunate to help carry on one of the oldest traditions in our business: tattooing the navies of the world. From the earliest Polynesian adventurer to the modern sailors of today, these men and women have remained true patrons of the art, and we as tattooists owe them a big thanks of gratitude.

Tattooing has been linked with the seafaring life of the navy for centuries. This tradition continued through the 1700s when Captain Cook discovered the tattooed natives of the South Pacific. Cook's sailors were looking for the perfect memento of their journey into foreign lands, and a tattoo was the most exotic souvenir they could bring home.

One of the great seaman-tattooists of all times was George Burchett-Davis, who in 1888 at the tender age of 16 joined the Royal Navy. He sailed on the H.M.S. Vincent and the H.M.S. Victory and for the next few years this ship and the world was his home. In his book, "Memoirs of a Tattooist" published in 1958, he recalled many of the trials and tribulations of the Royal Navy before the turn of the century:

“The great majority of British warships were very old and many were not seaworthy. The conditions for the men were grim. The biggest single fault was overcrowding. Of course, the crew slept in hammocks and comfortable though these may be, we had to hang them so closely together there was hardly any room to breathe. There was severe punishment for offenses. Men were put in irons and sentenced to a diet of bread and water almost every day aboard many ships.... With us however, justice, though rough, was fair.”

“I had received a nominal training ashore at Portsmouth. But it was left to the old salts to make me into a sailor. This they did in the time-honored way with threats, which they usually carried out. Some were upright men whom I grew to respect, others were brutes. One soon learned how to keep out of the way of the tough fellows and how to make friends who were strong enough to side with you, when the need arose. In short, it was a training in life as well as seamanship. Early in 1889 the Victory set sail for the Far East stations: Singapore, Hong Kong, and the Chinese treaty ports.“

Below are George Burchett's memories of Kobe, Japan:

"Over this scene the sun set in a wonderful glory. I did not have to wait long to see some of Japan's art up close. I realized what had inspired the tattoos I had admired. As I looked out to the islands and their delicate silhouettes I was, in my boyish way, moved for perhaps the first time in my life by pure beauty and I also felt a kind of sadness, which I did not understand. Now, I think, it simply meant that I realized that there are some things in life, which will always keep on the other side of the shop-window. In my case, I would never be able to achieve anything so lovely as the view from the H.M.S. Victory over Kobe with my own hand."

Burchett captured the repulsion and attraction of life at sea perfectly in the above paragraphs. The Royal Navy went on to rule the seas for many more decades, with minor irritation from the French, United States and German Navies. Today she is still one of the great sea powers of the world.

The United States Government issued a recruiting circular in 1909, which stated, "Indecent or obscene tattooing is cause for rejection, the applicant should be given an opportunity to alter the design, in which event he may, if otherwise qualified, be accepted." In the 1940s this obscure ruling caused one of the biggest booms the tattoo trade had known in years. From far and wide, eligible young men were flocking to their favorite needlers with demands for lingerie, skirts, brassieres, fans, bubbles, flowers, and butterflies, almost anything that would cover up a bare spot.

"Why?" exclaimed Charlie Wagner, who was reckoned the Dean of American Tattooing and who practiced his art on New York's famed Bowery, "It's been just like old-home week around here since Pearl Harbor." Can you imagine," he added "how a store clerk would feel in a town where everybody's clothes wore out at the same time? That's how I've been feeling. For going on 50 years, I've been turning out tattooed ladies, most of them naked, and now all I do is cover them up."

An interesting sidelight to this new enforcement of naval regulation showed up in the early 1940s. Charlie Wagner was up in New York's Magistrate's Court on a charge of violating the Sanitary Code. Wagner told the judge he was doing "essential war work," tattooing clothes on naked women. He explained that lots of fellows who had unabashed nudes needled into their skin now want to get into the Navy, which says that first they must get their girls dressed up. The Magistrate let Charlie off with a $10.00 fine and a warning to clean up his tattoo parlor on Chatham Square and Charlie went back to "essential war work."

During the age of sail, the commerce and defense of a nation depended upon the great square-rigged warships and the men who sailed them. Below are but a few of the popular tattoos of a seaman's life:

HOLD on the knuckles of one hand and FAST on the other. This is said to help the seaman to better hold the riggings.
A PIG, on the top of one foot and a ROOSTER on the other. This is said to protect the seaman from drowning, because both of these barnyard animals cannot swim so they would get the seaman quickly to shore.
An ANCHOR showed the seaman had sailed the Atlantic Ocean.
A FULL-RIGGED SHIP showed the seaman had sailed around Cape Horn.
A DRAGON showed the seaman had served on a China station.
A SHELLBACK TURTLE denotes a seaman who has crossed the equator.
A GOLDEN DRAGON denotes a seaman who has crossed the International Date Line.
PORT & STARBOARD ship lights were tattooed on the left (port) and right (starboard) side of the body.
ROPE tattooed around the wrist meant the seaman was a deckhand.

Miss Eleanor Barnes of the Seaman's Institute once remarked, "Some people pour out their colorful stories to juries. Others relieve the tension by writing for the confession magazines. The sailor enlists the tattooers needle upon his own body in dull blues, vivid reds, greens and yellows to record the story of his loves and hates, his triumphs, his religion, and his patriotism." Enuf said!