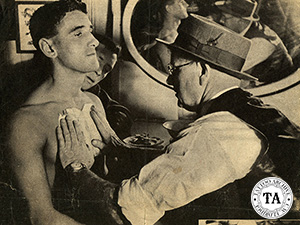 Some of the earliest known stencils are the felt pads from the Scythians tombs. The people of Borneo, and the Coptic people used carved block of wood to create stencils. Jacob Razzouk was a Coptic tattooist and coffin maker whose ancestors settled in Jerusalem in the 18th century and who passed down stencil blocks to him. Carved in heavy relief these blocks would be inked lightly and then the image could be transferred onto the skin for tattooing.

The 19th century found tattooists using hectograph ink and later hectograph pencils along with rice paper for their design transfer. This method offered a sturdy design on the skin but generally the paper stencils were a onetime use. Sometimes, to get around the single use problem, hectograph ink would be applied to a very light canvas or heavier paper so it could be re-inked and used over and over.

By the mid-1800s chemists around the world were perfecting plastics and by the turn of the century, cellulose or celluloid (plastic) stencils were in almost every tattoo shop in the industrialized world. At this time, the plastic stencil was not the only method for transferring designs to the skin. Louis Morgan, a San Francisco tattooist, wrote in his 1912 booklet, The Modern Tattooist: "transfers can be made for anything by laying tissue paper over the design and tracing over the lines with an indelible pencil." These indelible pencils were probably like our modern day hectograph. Also in Morgan's book he stated that making celluloid stencils was a much more difficult task than making transfers, a fact hard to deny. Most shops of that era had file cabinets overflowing with plastic stencils for all the flash sheets on the wall. The long life of the celluloid stencils added to their popularity and generally the paper transfers were left for custom designs not found on the shop wall. The following excerpt from Art, Sex and Symbol express the feelings some tattooists have about any type of stencils:

"Most modern tattooists first draw on the skin the outline of the proposed design so that the recipient can have some idea of the ultimate effect before it is too late. The less skillful employ stencils or transfers in order to reproduce as accurately as possible the wall-chart designs selected by the customer. Such a practice is cursed by the experienced and skillful tattooist."

This attitude still prevails in some circles of the tattoo world, but tattooists being the business people they are, always look for something to expedite their work. The use of stencils may have been a kind of quality control in a shop with a lot of artists at varying skill level; hence the stencils would give them a dependable road map of the design.

Acetate stencils were not easy to cut. Often an apprentice would start here in their career with the idea it would toughen their hands up. I still have a callous of my left hand from cutting stencils in the 1970s. Generally, twenty thousands acetate would be used for acetate stencil. Twenty thousands was stiff but not too stiff. A heavy sewing needle or a 78RPM record needle would be placed in a pin vice and that would be used to cut a deep scratch in the acetate. Powdered charcoal would be sprinkled into the etching on the acetate and then rubbed into the scratch. The excess charcoal would be dusted off and then the stencil would be transferred onto the skin, which was covered with a very thin layer of Vaseline. The Vaseline would pull the charcoal out of the etching and a very fragile outline would be transferred to the skin. As the outline progressed, the new tattooing could not be wiped. The operator would have to blot the excess ink off the skin.

These acetate stencils also offered an easy way for tattooists to exchange designs. Once the stencil was cut you could lay a piece of tracing paper over the etched side, take a pencil and rub the lead over the tracing paper and a copy of the design would appear. These rubs could then be mailed to friends in the business. This is one way that designs were circulated around the world before the use of magazines, conventions and the Internet.

As with many modern chemical innovations, these celluloid stencils had a down side. Celluloid is made by mixing various chemicals with wood or cotton fibers to create a hard material. Cellulose acetate is the best material for the tattoo operation, but sometimes tattooists would get cellulose nitrate, which is a flammable material and potentially very dangerous. A 1940s article in a Portland, Oregon paper credited a minor fire at George Fosdick's shop to nitrate stencils. The article read:

"The explosive nature of celluloid stencils in Sailor George's tattoo shop, 319 Burnside Street, tied up the heavy five o'clock traffic Wednesday evening, while firemen bustled to put out the flames. George Fosdick, proprietor, said he was sitting in his small booth when he first saw a puff of smoke and the stencils burning."

It would be safe to say that for the last 75 years, plastic stencils have reigned supreme in most of the bread and butter shops around the world. That is quite a period of time and in such a traditional field as tattooing, old ideas die-hard. The 1980's technology found a way to overcome the shortcomings of the paper transfer, and tattooists worldwide changed the way they thought about design transfer. Of course I am talking about the new thermofax machines, which would instantly copy most any design onto a paper transfer. Line drawings work the best for these.

Thermofax machines have become so popular in the tattoo business that B-List suppliers would rather include a thermofax with their starter kits than an autoclave. Much to the amazement of many old-timers, there are whole groups of tattooists who have never worked with plastic stencils.