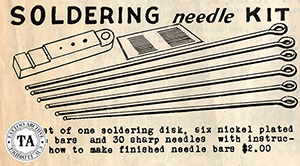 In the last few years’ needles, as used in the art of tattooing, have come a long way. It’s not so much the needles themselves, but the way they are packaged and sold to tattoo artists. Back in the day a tattooist bought needles by the thousands, sorted through them discarding the ones that were flawed, and soldered the remaining good ones into the configuration that worked best for them. Needle making was one of those skills that often separated the good tattooist from the not so good one.

For decades the finest needles were made in England and exported around the globe. In fact, in 1775 in the American colonies, a reward of 50£ was offered for the first 25 dozen "made in America" needles equal in quality to those from England. Many an American tattooist proudly advertised that they used only the very best English needles, while the English tattooist advertised that their needles were imported from Japan. I guess imported needles were always superior to those made at home. Today, quality needles are made around the world.

The process of needle making was passed down from tattooist to apprentice with great care. Tattooists would have their own way of assembling their needle set-ups. Before soldering irons and needle jigs came on the scene, a tattooist would use a Bunsen burner to melt the solder to join the needle and then attach them to the needle bar. The alignment was done by eye. When needle jigs and electric soldering irons came along the old-timer yelled, “there goes tradition!”

Advertisement on business cards often described the needles used: “clean needles”, “sterile needles”, “the finest imported needles”, “antiseptic needles”, “needles boiled and then placed in alcohol”, “electrical surgical needles”, “nickel plated needles” and one tattooist even went so far as to state, “the Navy’s latest fiber brushes, no more needles!” Today tattoo artists have it much easier; no longer do they have to breathe those flux and solder fumes. Most tattoo supply companies offer pre-made needles and several companies will custom make any needle configuration that a tattooist could need. We can hear the old-timer yelling, “there goes tradition!”