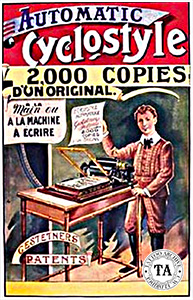 Xhere would the tattoo world be without the copy machine? Enlarging, reducing, flipping images, and ripping off designs is all part of the everyday running of a tattoo shop. We take the machine for granted until it goes down and have to find the closest copy shop. We have Chester Carlson to thank for this handy invention and this wins him a spot in tattoo history!

Chester Carlson was born in Seattle, Washington on February 8, 1906 and moved to San Bernardino, California with his family. His father was barber who developed crippling arthritis. When, at the age of 14 both his mother and father contacted tuberculosis, Chester became the main source of income for his family.

Despite all of these hardships Chester managed to enroll in a junior college at Riverside, California and in 1930 earned a degree in Physics from the California Institute of Technology. After several dead-end jobs Carlson entered night school to become a patent lawyer. He was always in need of more copies of patents and there were only two choices at the time to get more: either send the patents out to be photographed or laboriously write new ones. Carlson had been frustrated with the slow mimeograph machine and the cost of photography. That lead him to inventing a new way of copying. He invented an electrostatic process that reproduced words on a page in just minutes.

Many experiments and years of work led up to Carlson's first patent issued in October of 1937 for "electro photography”. Over the next few years IBM, Kodak, General Electric and many other major corporations shot down Carlson's idea. Two small companies stepped forward, Battelle and Haloid and invested money and manpower into the project and in 1948 demonstrated electro photography to the world.

At the same time, Haloid came up with a better name for the process. Somehow the name electro photography was not very catchy. An Ohio State professor suggested xerography from the Greek words xeros for "dry" and graphics for "writing". Haloid named its first photocopier the XeroX Model A, the last X being added to make the name similar to that of Kodak, another Rochester corporation. In 1958, Haloid officially changed their name to Haloid Xerox, and finally, in 1961, to just Xerox. Xerox Corporation also trademarked the name "Xerox" and has protected the name carefully. In the 1980s the United States Postal Service recognized Chester Carlson's achievements and issued a 21-cent stamp honoring him.