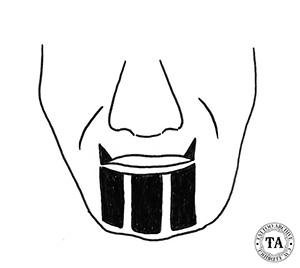 In 1877, Stephen Powers wrote in Tribes Of California, "Nearly every man has ten lines tattooed across the inside of his left arm about halfway between the wrist and elbow; and in measuring shell-money, he takes the string in his right hand, draws one end over his left thumb-nail, and if the other end reaches to the uppermost of the tattoo-lines, the five shells are worth $25 in gold or $5 a shell. Of course it is only one in ten thousand that is long enough to reach this high value." "Single shells are also measured on the creases on the inside of the left middle finger, a $5 shell being one which will reach between the two extreme creases. No shell is treated as money at all unless it is long enough to rate at 25 cents. Below that it degenerates into 'squaw money', and goes to form part of a woman's necklace." Illustrations enclosed showing the measuring tattoo and Chin tattoo for the women.