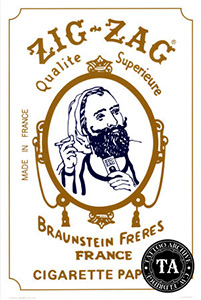 The Zig Zag Man was one of the most popular tattoo designs from the 1960s. The folk story goes that in the 19th century during a battle of Sevastopol, a French soldier also known as Zouave, had the misfortune of having his clay pipe broken by a flying bullet. Needing a smoke he decided to try rolling his tobacco in a piece of paper torn from the bag that his gunpowder came in.

This worked but it was in 1894 that the Braunstein Brothers figured out the process of interleaving papers in a zig zag manner and putting them in a convenient paper booklet that took the market by storm.