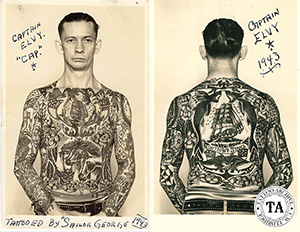 C aptain Elvy aka Elvy F. Campbell 1909-1975 was tattooed by west coast tattooist Sailor George Fosdick in 1943. Elvy’s history is not complete but it is known that he was born in Clay County, Nebraska southeast of Omaha. He worked as a tattoo attraction and tattooist in the 1940's and was seen with the Wallace Bros. sideshow in 1943.