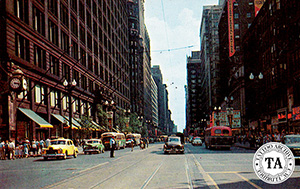 Chicago was still a wilderness roamed by Native Americans at a time when many American cities were great centers of trade and industry. In less than 100 years after it was founded, Chicago joined the ranks as one of the largest cities in the world. The city gets it name from the Indian word Checagou loosely translated as skunk, wild onion, mighty, and powerful. Mighty and powerful are words I would use to best describe this remarkable city with its rich and varied history. The 1990 World Almanac lists Chicago as the third largest city in the United States after New York City and Los Angeles, and the twenty-second largest city in the world. This was remarkable for a city that was not incorporated until 1833. In 1840 the population of Chicago was 4,417 and by 1850 it had grown to 29,936! After this growth spurt, the city never looked back.

Professional tattooing first came to the United States by way of New York City in the 1840s and a few years later came to Chicago. The Archive has no record of who can lay claim to the honor of being Chicago's first professional tattooist. During the ensuing years, many artists have called Chicago home.

Chicago has a rich history of tattooing that dates back to before the turn of the century. That same tradition is being carried on today as evidenced by the1993 Tattoo Tour. Tattooing is alive and well in the "Windy City."