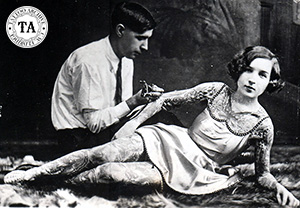 Both Deafy aka Samuel Grassman (1889-1965) and Stella aka Edith Grassman (1909-1977) were tattoo artists. Stella also worked as an attraction in the 1920s. This couple is perhaps best known for their tattooing in Philadelphia at #836 and #839 Race Street and at #19 Bowery in New York City. When they worked together at #19 Bowery in the 1930s they had a great double-sided business card promoting both of them, “Original Deafy & Miss Stella.” But like many tattooists of that era the Grassmans tattooed in several towns looking for that perfect spot.

Deafy had a shop in Newark, New Jersey in the early 1920s. In 1927 during Fleet Week the Grassmans were listed in the Newport, Rhode Island city directory as tattoo artists working at #249 Thames. By the 1930s Stella had been featured in beautiful color photographs in The National Geographic Magazine and the Grassmans made the move to Charleston, South Carolina. There they operated a restaurant/tattoo shop called the Ship’s Inn at #119 Market.

Things did not go well for them in Charleston. In the 1940s their business was placed off limits by the military and in 1959 all tattoo shops were placed off limits by the Armed Forces Disciplinary Control. Deafy and Stella were divorced in the mid 1950s and with all the problems from the military and health departments, Deafy left Charleston and moved to Atlantic City. He later moved back to Phildelphia on Race Street where he worked with Bill Greenwood. In Eddie Funk's book My Vida Loca Vol #2 he talked about seeing Deafy at #839 Race Street with Greenwood in 1962.

Samuel “Deafy” Grassman died in Philadelphia March 7, 1965. Although Deafy and Stella had been divorced for many years, when Edith “Stella” Grassman died on January 26, 1977 they shared a grave marker in Charleston, South Carolina.

Very few photographs or flash of Deafy’s tattooing survived. But if you ever wondered about the quality of Deafy Grassman's work, just take a look at Stella's tattooing and I believe you will agree, he was one of the best tattooist of his era.