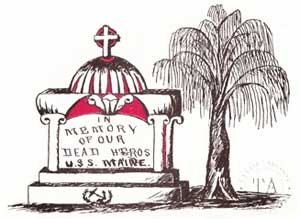 Back in the day when ships were made of wood and real men were made of iron, The Life of a “Jack Tar” was full of peril: press gangs, shanghais, evil captains, fog, foul weather, and shipwrecks to name just a few. Many of these sailors are buried in the graveyard of the Atlantic.

The graveyard of the Atlantic is the ominous name used to describe two area of the Atlantic Ocean that is notorious for shipwrecks. One is located at the entrance to the Chesapeake Bay at Cape Henry along the coast to the Outer Banks of Virginia and North Carolina and around Sable Island, which is located off of Nova Scotia. Major Atlantic Ocean currents meet in these areas and create some very rough waters and fog, which are a sailors’ nightmare. These waters have claimed over five thousand ships since record keeping was started in 1526.

To make matters worse, in the 1700s the Outer Banks of North Carolina had a group of people called the “wreckers” that made their living scavenging shipwrecks. The story goes that horses (nags) with lanterns tied to their necks would be walked along the beach. The up and down motion of the lanterns would appear to be another ship ahead in clear water. The unschooled captain would run his ship aground following the false light. Some think that this is how the town of Nags Head, North Carolina got its name.

This part of the eastern seaboard was so famous for its shipwrecks that the unincorporated town of Wash Woods grew up in the southeastern corner of Virginia. The town got its name because some of it was built from wood that had washed ashore. The local legend goes that the survivors of shipwrecks settled the area in the 16th and 17th century. The sea that brought the lumber to build the city started to reclaim it in the 1920s, and by the 1930s townsfolk began to leave. Today the area that was Wash Woods is part of False Cape State Park.

Queen Anne Revenge - In June of 1750 Blackbeard the pirate ran his flagship the Queen Anne Revenge aground near present day Beaufort, North Carolina.
USS Monitor - Among the best-known shipwrecks off the North Carolina coast was in 1862. The Monitor was the first ironclad warship commissioned by the Union Navy.
HMS Bounty - The replica that was built in Nova Scotia for the 1962 film ran afoul and sank in October 2012 during Hurricane Sandy.