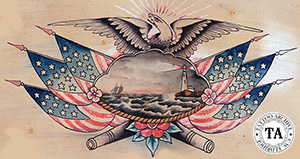 The eagle is perhaps one of the most popular of designs in the tattoo world on both sides of the Atlantic, It has been seen on shop walls since the beginnings of professional tattooing.

On July 4, 1776, after the thirteen states won their independence from Great Britain, a committee was formed to design a Great Seal. The United States needed an official symbol for treaties and transactions. It took six years, three committees and the work of fourteen men before Congress accepted a design. The finished design took elements from each of the three committees.

On June 20, 1782, America chose the Bald Eagle as its national emblem. The Great Seal consists of an eagle facing forward with his wings spread. On the bird’s chest is a shield with thirteen red and white stripes on a blue background. In the right talon the eagle holds an olive branch, symbolizing the desire for peace, and in its left talon, a bundle of arrows showing that America will always be ready for war. The eagle’s head is turned toward the olive branch to symbolize the preference for peace. Above the eagle on a blue background are thirteen stars and in it’s beak is a scroll with the motto “E Pluribus Unum”, Latin for “Out of Many, One.” This motto is attributed to Thomas Jefferson.

With so many folks involved in the design it was only natural that some would disagree with the eagle being chosen. None were more outspoken than one of the original design committee members, Benjamin Franklin. He had this to say:

“I wish that the bald eagle had not been chosen as the representative of our country, he is a bird of bad moral character, he does not get his living honestly, you may have seen him perched on some dead tree, where, too lazy to fish for himself, he watches the labor of the fishing-hawk, and when that diligent bird has at length taken a fish, and is bearing it to its nest for the support of his mate and young ones, the bald eagle pursues him and takes it from him.... Besides he is a rank coward; the little kingbird, not bigger than a sparrow attacks him boldly and drives him out of the district. He is therefore by no means a proper emblem for the brave and honest. For a truth, the turkey is in comparison a much more respectable bird, and a true original native of America, a bird of courage, and would not hesitate to attack a grenadier of the British guards, who should presume to invade his farmyard with a red coat on.”

Eagle tattoo designs come in all shapes and sizes, from large back pieces to medium sized chest pieces to small arm ones. Often they are used to frame other designs like ships, anchors, girl heads etc. Included with this article are but a few eagle designs used in tattooing.