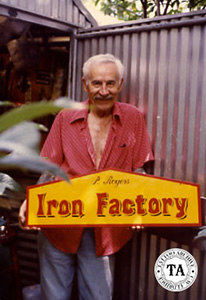 Paul Rogers was born on September 9th 1905 in North Carolina, and spent most of his childhood moving from one cotton mill town to the next. Paul started to work in the mills when he was only 13 years old, long before child labor laws were enacted. "Nothing but hardship, man it was hard for everyone." Paul worked in the cotton mills until he was 37 years old. Thankfully, his last years in the mills were part time, because in 1926 when Paul was 21, he got his first tattoo and found his lifetime occupation.

Only two years later he was tattooing with a kit he mail ordered from E.J. Miller in Norfolk, Virginia. In 1932 after tattooing all the folks around his home, Paul hit the road with the J.J. Page Show in search of adventure and clean skin. Later that very same year, Paul joined the John T. Rea Happyland Show where he met and married the boss's daughter, Helen Gensamer. For most of the next decade Paul and Helen worked the carnival circuit in the summers and worked in the cotton mills during the winters.

In 1942 when Paul got a chance to tattoo in Charleston, South Carolina, he jumped at it. At this time his pay envelope from the mill for a 40-hour workweek was $42, which was the biggest payday he ever had in the mills.

After getting his shop up and rolling, Paul now was making $150 to $200 a week! Needless to say, Paul never went back to the mills. In 1945 Paul began a 5 years association with Cap Coleman of Norfolk, Virginia. Coleman was already a legend in the tattoo world and Paul said it was like a dream come true to be invited to work with Coleman. Paul stayed in Norfolk until 1950, when the city fathers shut down tattooing in that city. Coleman moved across the Elizabeth River to Portsmouth, Virginia and tattooed for a few more years.

Paul and Lathan Connelly opened shops in Petersburg, Virginia and Jacksonville, North Carolina. In 1955 when Paul grew tired of traveling between these shops, he took the Jacksonville location and Connelly took the Petersburg shop. This is where the mail order supply business of Spaulding & Rogers was formed. Paul was involved in this business for only a couple of years, but Paul and Huck Spaulding worked together in Jacksonville up until 1961. In 1960 they closed their shop on Courts Street and went to Alaska. This only lasted for one month and they returned back to Jacksonville, North Carolina soon after.

From 1961 to 1963 Paul and his family lived in Camden, New Jersey where Paul tattooed with Sailor Eddie Evans. In 1963, he moved to Jacksonville, Florida and tattooed with Bill Williamson. The very next year Bill Williamson died and Paul inherited his shop. By 1970, Paul was back working in Jersey with Ernie Carafa on a part time basis.

In 1970 Paul and Helen Rogers bought a mobile home at 1200 Shetter Avenue #3 in Jacksonville, Florida. It was here that Paul brought his decades of experience together with what he had learned from the likes of Coleman, Bill Jones, Jack Wills, Charlie Barr and others, and built some of the best running tattoo machines in the business. In 1982 Helen, Paul's wife of 49 years, died. She was buried at the Greenlawn Cemetery in Portsmouth, Virginia. In 1983 Paul Rogers was admitted to the Tattoo Hall of Fame in San Francisco, California, which was part of the Tattoo Art Museum created by Lyle Tuttle.

Paul suffered a stroke at his home in Jacksonville in 1988 and never fully recovered. The next 2 years were spent in a nursing home in Jacksonville. Paul died in 1990, at the age of 84, after spending 56 years in the tattoo business. He was buried with his wife in Portsmouth, Virginia.Paul left his extensive tattoo collection to the Tattoo Archive. In 1993, C.W. Eldridge, Alan Govenar, D. E. Hardy and Henk Schiffmacher formed a California nonprofit corporation, The Paul Rogers Tattoo Research Center ("PRTRC") where they serve on the Board of Directors. The primary goal of the PRTRC is to preserve tattoo history.

Timeline of Paul Rogers' Life
Want to learn more about Paul Rogers? We have several booklets about Paul's life in our online store.