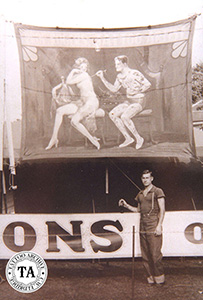 On September 9, 1905 Paul Rogers was born in a log cabin in the woods of Couches Creek, in the western part of North Carolina. He was the third of five children born to Belva and David Rogers. When he was just 5 years old, his father died. Two years later, when he was 7, he went to live with his grandfather who lived just a few miles away. His childhood memories were full of stories recalling both hard work and fun.

Paul got his first tattoo from Chet Cain, a circus/carnival tattooist who was working with the John Robinson Circus at that time. As the story often goes, Paul's first tattoo changed his life. Just 2 years later he mail-ordered his first tattooing machine from E.J. Miller of Norfolk, VA, and began his life-long career as a tattooist. Paul quickly ran out of clean skin in his small cotton mill town and hit the sawdust trail to make a living as a professional tattooist.

Paul joined the John T. Rea Happy Land Show and worked in the sideshow. This mud show traveled up and down the eastern seaboard, staying but a few days in each town before moving along. He signed on as the resident tattooist but got more than he bargained for when he met his future wife Helen on that sideshow platform. Not only was Helen a Hawaiian dancer and snake handler, she was also the boss's daughter!

In the winter months the carnival folks had to come off the road. For Paul, wintertime meant that he was back working in the cotton mills trying to keep the bills paid. This cycle went on until 1940s when Paul got an opportunity to tattoo full time in Charleston, South Carolina with F.A. Myers. He jumped at this chance and never looked back. In the early 1940s Paul's tattooing caught the eye of Cap Coleman in Norfolk, Virginia and Coleman offered Paul a job. At this time Coleman was considered one of the best tattooists in North America. Paul was thrilled at the opportunity to work with one of the greats and worked with Coleman from 1945 to 1950.
Want to learn more about Paul Rogers? We have several booklets about Paul's life in our online store.