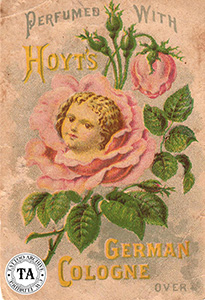 The Tattoo Archive has always been interested in the origin of tattoo designs. At times it seemed that the walls of tattoo shops simply mirrored the world outside its doors. However the public may be our best source of new imagery. Everyday customers walk in the door with designs in hand and many of them will work their way through the tattoo business with some becoming classics. It is those classics that we like to talk about!

Flower designs have been a mainstay in the tattoo business for centuries, and no flower design is more popular than the rose. The rose has been done in thousands of innovative ways with some tattooists making a name for themselves with their clever rose designs. One of our favorite variations on the rose is the "head in the rose" design. The Archive has versions of this design on postcards and trade cards that dates back to 1903, like the Hoyts German Cologne card seen here. Most of these show a baby or young girl's head as the center of the design, although a different flower design will sometimes be used with a woman's head as the center.

The earliest tattoo version the Archive has seen of the head in the rose design comes from William Cail. The Ohio Tattoo Museum has a beautiful sheet of flash by Cail, probably from the 1910's. That design remained popular for the next fifty years and has been seen in different variations on sheets of flash. Some tattooists would not be satisfied with just the head as the center of the rose and would put full nude bodies coming out of the flower. Others would use hula girls, kewpie dolls and sailor girls. This design did fall out of favor in the 1950s but with the current popularity of traditional designs it is making a bit of a comeback.