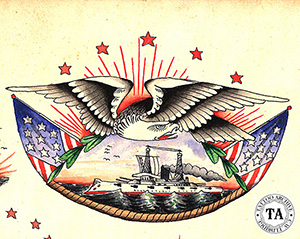 Sailing ships ruled the seven seas for centuries, but in 1736 Jonathan Hull's patent for a steam-driven boat in England started folks to thinking.

By 1807 Robert Fulton's lake steamer Clermont had began regular passenger service on the Hudson River between New York City and Albany. With her 4 to 5 miles per hour against the current, she was a wonder of her day.

English ship builders were far ahead of the Americans in harnessing steam. In fact, at one time Americans described steamships as "stoves on a raft." As many ships used a combination of sail and auxiliary steam engines, there is some controversy about which was the first steamship ship to cross the Atlantic. In 1819, the American-built sailing ship Savannah, which was fitted with a side wheel, crossed the Atlantic in twenty-nine days (which not that much faster than by sail). After her return to Savannah GA, her engine was removed and she finished her service as a sailing ship. The Great Western, an English side-wheeler, was the first ship built for scheduled runs across the Atlantic. Her best time, in 1837, was twelve days and fourteen hours. Many viewed this as the death knell of the great age of sail, although it was a long time before steam completely replaced sails. Commercial sailing ships were still in use in the late 1940s.

After the Civil War (1861-1865) the United States allowed Navy ships to get run down, and in 1882 Congress adopted a policy to modernize the Navy. Named after the paint job on the hulls of ships, the "White Squadron" was born. This was the first group of modern steel ship used by the Navy and all were built with domestic steel. These ships became the core of the "new Navy" and helped America become a great sea power.

An interesting thing about these early steamships is that they were all fitted with masts and rope rigging for sails. I am sure the builders, buyers and operators of these steamships were confident that in time, steam would replace the sail--but not overly confident as to send these ships to sea without the essentials needed to rig sails in case the steam engine went south. The sailors, being the superstitious lot they were, may have had a say about how these ships were rigged and the amount of sails they would carry.