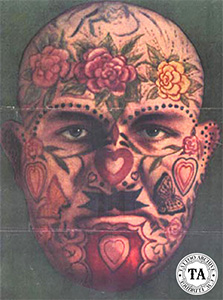 T“he World's Worst Man, my most plucky client, J. P. Van Dyn, who now works as a stevedore in the Southampton Docks is sixty three years of age. He claims to have been in every famous prison in the world, including Sing Sing, Devil's Island. Very few of my clients, except professional fairground artist, would decide to ornament their faces in such an elaborate and distinct manner as Mr. Van Dyn. He sketched some of the designs himself." The above quote is from one of England’s most famous tattooist, George Burchett.
The book The Speakers by Heathcote Williams had this story about Van Dyn. “A former Chicago gangster is in Chingford trying to get a price on his head. He wants to sell it to Professor Ben Gunn, a Chingford tattoo artist, on a pay-now-collect-later basic. Reason 68 years old South African born Jacobus Van Dyn considers it so valuable is that it is the world’s most tattooed head. Professor Gunn told the Chingford Guardian that he and a German tattoo artist would buy the head for about £25. After Mr. Van Dyn’s death it would be skinned and stuffed by a taxidermist and would be exhibited. It is common practice in Japan said Professed Gunn.”