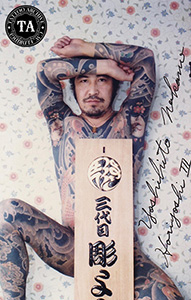 This city lies on the western shore of Tokyo Bay, about eighteen miles from Tokyo. Yokohama was only a tiny fishing settlement in 1854, when Commodore Matthew Perry of the United States Navy signed his agreement with the Japanese, which opened up Japan to Western trade. Maybe because of this seafaring tradition, Yokohama became a major city for tattooing in Japan.

In the later 1800s the fame of Yokohama tattooist Hori Chyo began to spread throughout the western world. On August 29, 1897, the New York World wrote:

"Hori Chyo is the Shakespeare of tattooing because none other approaches him. His lines are distinct as if they were made with the finest of delicate brushes, Even the prejudice against the barbaric and senseless adornment cannot disguise the fact that his design is one of art and is executed with rare skill."

Albert Parry in his book Tattoo stated the a certain millionaire named Mr. Bandel from New York City offered Hori Chyo a job in America at an annual salary of $12,000.It was said that the tattooist was willing to immigrate but for some reason the deal fell through.

In the 1970s Yokohama tattooing came back into the limelight with Mitsuaki Ohwada and his Tattoo Club of Japan. Ohwada was very active and corresponded with tattooists around the world. He came to the United States in 1986 to be part of an art exhibit at the Peabody Museum entitled The Art of Japanese Tattoo. Mitsuaki Ohwada died just three years later in 1989.

Today great tattooing is alive and well in Yokohama. The Horiyoshi III family carries on the grand tradition of tattooing in Japan. Born in 1946, Yoshihito Nakano has been tattooing for over thirty years and is recognized as one of the greats in the tattoo world. In the last few years Nakano has found a home for his large collection of tattoo memorabilia by opening a museum to further educate the public worldwide about tattooing.